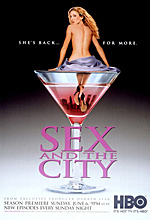 Cindy Chupack Sex in the City

I wrote poems as early as the third grade, and I had a teacher, Mrs. Davis, who was incredibly impressed and encouraging. I remember it was the first time I felt good at something. I saw Mrs. Davis recently and she had saved all my poems.

I took the screenplay writing session when I was working with a partner, and we couldn’t afford to both take it, so I took it first and then we did the assignments together, so I spent most of the time sounding like a wacko. “We were thinking… I mean, I was thinking…”, but I enjoyed the session and it gave me some good tools for writing. It also got me over my fear of writing more than 45 pages, double-spaced.

What are your favorite WBC tools?

Short scene conflict and on-the-nose dialogue writing, just to keep moving forward, to get the shape of the thing down. I often rewrite and rewrite so my first pages are brilliant but in the end I run out of time, so it was good to learn how to just get it down, and then go back and polish.

How you got your start in the business:

I studied journalism at Northwestern University thinking that was a way to make a living as a writer. (I was from Oklahoma, so I didn’t know anyone in the biz or ever think I would be someone in the biz.) I wasn’t a great journalist (bored by the facts/no stomach for the intrusiveness), so I tried to get into something more creative like advertising copywriting. I wasn’t so great at that either. However, an advertising job got me to New York, and New York was incredibly inspiring. It was there that I started reading magazine essays by women like Merrill Markoe and Wendy Wasserstein and Cynthia Heimel, and for the first time I think I understood what it meant to “write in your own voice,” humorously and conversationally. So I sent an essay to this magazine called New York Woman, and they published it and a TV writer/producer saw it and encouraged me to think about sit com writing.

Describe the Transition Stages of Your Career:

I continued to occasionally write essays for magazines, mostly about relationships and dating. I moved to LA and got a job at Disney TV animation reading TV specs, which helped me learn to trust the system because I was dying to find good material, and there just wasn’t a lot of it. When I did find something good it was easy to help that writer. Disney paid for sessions, so I took a bunch, including a session at UCLA extension on sitcom writing, and I hooked up with a partner – the woman teaching the class – and we worked for about five years with some really nice people on some really dumb shows. Then Robin Schiff (ROMY AND MICHELLE’S HIGH program REUNION/ALMOST PERFECT), worked with us on one of those dumb shows and saw that we were better than our credits, so she told a lot of other writers about us, including Darren Star and the people at Bungalow 78. We were on Coach for a couple of years, which was a big step up because people other than my parents had heard of it, and that’s where we met Phil Rosenthal, who created Everybody Loves Raymond. Our second year at ELR, I broke up with my partner and got a freelance assignment from Sex and the City. (Mainly I thought it would be a great writing sample, but also I loved the show, and being single, I had a zillion ideas and now I could use those magazine essays as samples.) That experience (the pitching and the resulting script, “The Chicken Dance”) led to a permanent job at Sex and the City.

How many hours per week do you devote to your creative work:

Most of them. About 60-80. But I think talking and hanging with friends, getting annoyed by your family, seeing films, a head-clearing bike ride — that’s all part of the process. Plus I was on a show where sex was research.

What biases or preferences do you have regarding the writing process?

I’m not sure I understand the question. I like having time to write and rewrite, I don’t like group writing as much as individual, although I love breaking stories with a group and doing punch-up with a group. I think too many people can ruin a great vision (especially if a lot of those people aren’t writers). I think you should write what you love, not what you think will sell, and take jobs if you like what you’ll be writing about, not for any other reason, including money. Sex and the City wasn’t a hit when I signed on, and it paid a lot less than Everybody Loves Raymond, but I just followed my heart on that one. (This particularly annoys my dad, an accountant.)

Do you have any special rituals, places you write, etc.?

I like to be home the whole day in pajamas. I make tea and rarely drink it. If I’m stuck, I go for a blade or bike ride to try to figure out what’s not working. (The main reason you get stuck, I think, is not writer’s block, it’s when something in the story’s not working.)

Do you have anything you’d like to say about LA or the entertainment world?

HBO has the right idea. Treat writers with respect and trust and let them do what they do best and you will reap the benefits.