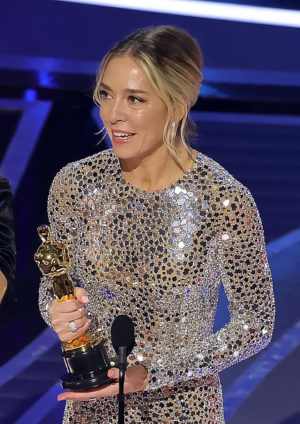 Congratulations to alumnus Sian Heder for her Best Adapted Screenplay Academy Award. Amid the Oscar telecast’s thunder slap heard around the world, Sian took home the gold statue for the independent film she wrote and directed about a child of deaf parents, CODA, which also garnered the award for Best Picture.

Sian’s recognition, as well as the notice for her film, is validating on many levels, and a well-deserved tribute to her persistent excellence. Shortly after her brief tenure on staff in the mid-2000s, founder Jeffrey Gordon presaged her ultimate level of achievement in his recommendation on her behalf to the AFI Women’s Directing Workshop.

To quote JG from January 2005: “Avoiding cliché, (Sian’s) work integrates the theme of generational angst with the idiosyncrasies of being an empowered female today…intent on achieving work of significance…her combination of qualities (as a writer and artist) intrigues me to no end. I have no doubt she will be a huge success.”

By 2013, Sian was staffed on Orange Is The New Black, then in its second season.  As is true to her character, she returned to our stage at Writers Boot Camp’s Bergamot Station HQ to share insight with fellow writers and filmmakers.

Here are a few short audio clips from JG’s conversation with her:

—Telling JG About Writing For Actors

—The Relevance of Outlining

Considering that Sian’s success was predicted only 17 years ago, and she’s worked steadily since, perhaps the answer to the last question of our Career Survey Here would be best evaluated with forethought and estimation of the creative process.