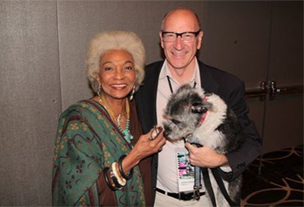 Last weekend, Writers Boot Camp Founder Jeff Gordon had the pleasure of being one of five panelists for the Hollywood Black Film Festival’s Project Stargazer competition at the W Hotel in Hollywood.

Project Stargazer’s mission is to engage and inspire movie-goers by giving new voices from diverse communities access to experts from NASA to create science fact inspired science fiction screenplays that can be developed into films with broad audience appeal.

After listening to eleven semi-finalists pitch their projects in front of a live audience, Jeff and the other judges chose three Stargazer finalists to participate in the 2014 Project Stargazer Lab, where they will work on creatively advancing their projects from script to screen. Each Stargazer finalist will be paired with mentors from the entertainment industry and NASA as they each develop their sci-fiction screenplay at Writers Boot Camp.

Clockwise left to right: JG with Project Stargazer Program Director and WBC Pro Member Tony Chamblee. JG with fellow panelist Kevin Grevioux, creator of UNDERWORLD. JG and Junior with the lovely Nichelle Nichols, or as many Trekkies refer to her, Lt. Uhura.